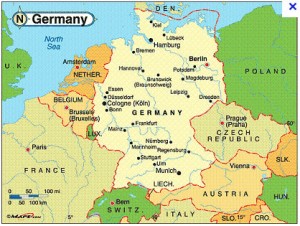 Debbie and Miriam Hubbard, who were part of the team who went on the Germany refugee trip, would like to give you some feedback on how it all went.

”We first heard about it at CTK when the Kim family came to church to explain the work of ‘Destinations’ but they also told us about what they were going to do in Germany just before Christmas. As they spoke, I felt strongly that God was speaking to me and saying this is something you need to do. And from that moment on, I knew I had to do this and thankfully Mum sensed God asking her to go too!!

We left Shrewsbury on Saturday 19th Dec at 7.30am in a car containing myself, Hannah Kim, Debbie, Paul (from 6.30 service), Mike Kim (the driver!) and two Koreans called Paul & Natasha – 7 of us. Another can with 7 people had already left the day before – so there were 14 people in all in the team. It took us about 13 hours to reach Neuss, on the outskirts of Dusseldorf. That’s a long way to go!!

When we were there (19th-22nd Dec) we met up with Parvese a refugee friend of the Kim’s with an amazing testimony and heart for God! We divided the day into sections: in the morning we prayed together as a team, and we got ready for the parties we were giving for the refugees. I and the other children were involved in the ‘entertainments’ so we had to get ready for that! After that we went and set up for the parties which were in a nearby Turkish restaurant. The parties followed – one on Sunday, the other on Monday and then some of the team stayed on after us to do one on the Tuesday too. Each party went incredibly well, and to see the look of happiness on the refugees faces made it all worthwhile.

Personally, I also did a dance in the entertainments, and Mum and I gave out coats to a small group of refugees we had spent the most time with where they live in tower blocks. The hardest bit was seeing where the refugees are living, and listening to their stories of what they have been going through. My favourite bit was bringing them happiness, and seeing them enjoy themselves after all they had suffered! So thank you so much to all who have supported us on this amazing journey!