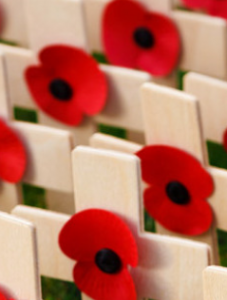 This year Remembrance Sunday marks one hundred years to the day since the end of the first world War. As the guns fell silent – a century on – we are joining with churches and communities all over the UK and further afield in remembering the past, honouring those affected by war, and praying for peace in the future.

We are aware of at least 65 people from Meole Brace who died in WW1, and countless others who were affected by the 1914-18 conflict. You’ll see a few roads nearby with signs up on them, remembering particular names of people who lived on that road. It’s poignant to think that these were young men from our local community who lost their lives. There’s a war memorial in Holy Trinity Church which remembers all these people. Use the links below to have a look at the names listed on the memorials, as well as a brief biography of what has been found out about many of these people. (copyright and compiled Philip Morris 2009)

As we celebrate one hundred years since the end of WW1 we are looking to plant 1,000 remembrance crosses. Please take a cross from the Trinity Centre reception. You might like to write on it the name of someone who was affected by war, or a short prayer for peace. Then leave it in the bowl in the reception area, and we will plant it in the garden area before Remembrance Sunday.

Then come and join people from across the local community for Remembrance 100 celebrations on Sunday 11th November at Holy Trinity Meole Brace. As well as the regular service at 9am, there will be a community celebration beginning in the churchyard from 10.40am and with the act of Remembrance itself at 11am, after which the service continues in church.

The bell ringers at Holy Trinity will also be joining in special events nationally to mark the one hundredth anniversary since the end of the war. Before the service they’ll be ringing the bells “half muffled”, and then at 12.30pm on 11th November they will be ringing again along with hundreds of churches across the country to signify “Hope and Optimism for Peace” etc.  On Sunday 4th November they also rang half-muffled remember Shropshire’s Wilfred Owen, the war poet, who died on this day one hundred years ago, as well as celebrating next week the two hundred and fiftieth Sunday since the bell ringing team started up again at Holy Trinity.  The bellringers are doing an amazing job, do speak to Michael Carding if you want to find out more.