“The Meole Three” get ordained 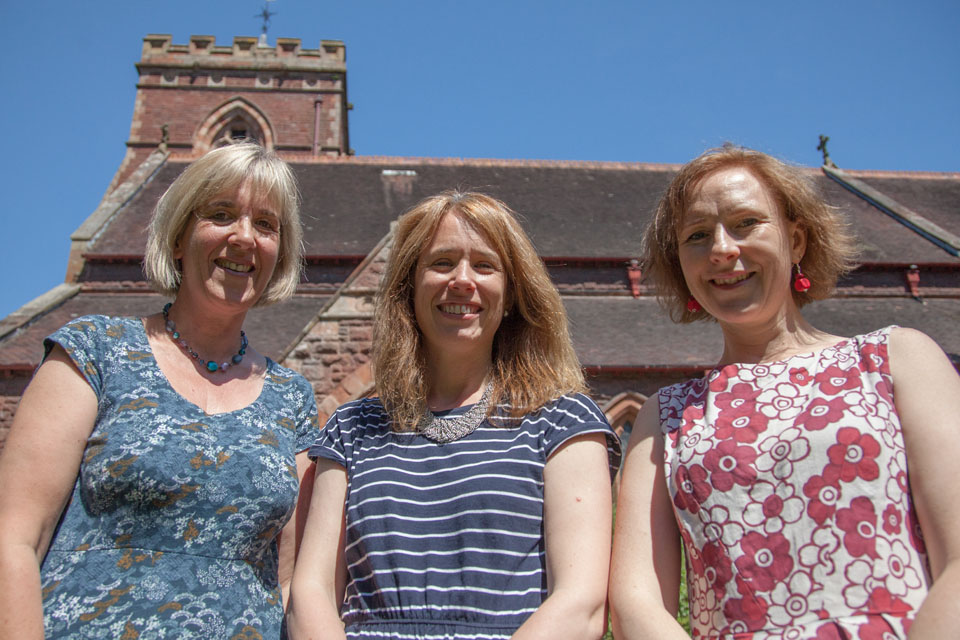 A Shrewsbury church will celebrate a very rare occurrence this weekend – the ordination of three new curates from its congregation.

The trio will mark the end of their training and the start of their parish ministry on Saturday, 1 July, when they are ordained as deacons at Lichfield Cathedral.

Their development has been overseen by the Vicar of Meole Brace, the Revd Phil Cansdale, who said: “It is such a privilege to see Ana, Fi and Hannah get ordained this year. They say ‘it takes a village to raise a child’, and it certainly takes a whole parish and wider community to nurture and train an ordinand! Of course, one of their greatest gifts has been to see lots of other people get involved in ministry alongside them, and to remember the call for all God’s people to step out in service, whether lay or ordained.”

The women, who are all mothers and former teachers, are three of 22 people who will be getting ordained by the Bishop of Lichfield, the Right Revd Dr Michael Ipgrave, this weekend.

Fi, who has been a secondary school teacher, will serve her curacy at St George’s Church in Frankwell, Shrewsbury. She said: “Three years at St Mellitus North West theological college and Trinity Churches have been a real joy, and provided such great opportunities to grow and to learn. I’m very much looking forward to serving my curacy at St George’s; finding out what God is doing and joining in.  My prayer of the last few weeks has been, ‘For all that has been, thanks. And for all that is to come, yes!’”

Hannah, who taught A-level psychology, will be a curate at in the rural Severn Loop parishes in the north and west of Shrewsbury. She said: “The adventure of ordination training has been a huge blessing and a time of profound learning. I’ve loved being part of the life of Trinity Churches, which is a community that has nurtured, supported and prayed for me from birth. As I embark on a new chapter at Severn Loop Parishes, I’m really looking forward to engaging with rural ministry, getting to know and love new people, to serve them well and to unashamedly mine the wisdom of my new incumbent – Mary-Lou Toop – who I know has so much to teach me as we work together.”

She added: “If you had told me, even five years ago, that I would be on the brink of ordination this year, I would have probably laughed at such an idea and not believed it possible. Yet my sense of call has led me to this place and a gracious loving God has sustained me through many joys, challenges and changes on the journey along the way. Training at St John’s School of Mission, Nottingham, whilst serving a placement at Oxon Church, Shrewsbury has been an incredible privilege and as I move to serve my curacy in Albrighton, Boningale and Donnington, I am both excited and look forward to all that lies ahead.”

The number of people coming forward for ordination in the Diocese of Lichfield, which covers all of Staffordshire as well as the Black Country and northern Shropshire, is on the increase with twice as many new curates in 2017 compared to 2016. More information about this year’s ordinations, including photos from the weekend, will be available at www.lichfield.anglican.org

Pictured: From left: Ana Lawrence, Fiona Iddon and Hannah Lins in that order.

The Diocese of Lichfield is an area with a population of over two million which includes Staffordshire and Stoke-on-Trent, the Black Country and most of Shropshire.